The report reflects the work of the center with the Pew Research Centers to survey hundreds of experts about how extended-reality tools and the “metaverse” will evolve in the next two decades.

A recent report by Elon’s Imagining the Internet Center and the Pew Research Centers has been featured an article appearing in Fast Company that explores the future of the “metaverse.” 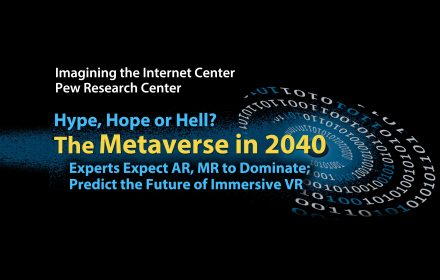 The report encapsulates and analyzes a survey of hundreds of experts who were asked about how they see technologies that extend the bounds of reality, such as augmented- and mixed-reality systems, evolving during the next two decades and how the “metaverse” that taps into those technologies will impact daily life.

In the article “Everything you always wanted to know about the metaverse,” Fast Company editor Harry McCracken explores where the quest to establish the metaverse as a fully immersive digital experience is now, and what needs to happen to make it a reality. McCracken turns to the new Imagining the Internet Center and Pew Research Centers report to answer questions about how long it will be until we are all “sucked into the metaverse — ready or not.”

This could take a while. In a recent survey of 624 technologists conducted by Pew Research Center and North Carolina’s Elon University, only a slim majority—54%—thought that the metaverse would be a highly evolved part of everyday life for at least 500 million people by 2040. Even that figure is equal to just one-tenth of the internet’s global population in 2022.

It’s not just about the technology being ready. Among Pew/Elon respondents, “a large share predicted that the metaverse will not be broadly adopted if the public perceives it to be an even more invasive and threatening geography of intrusive surveillance and rampant monetization” than the current internet, says Janna Anderson, the director of Elon University’s Imagining the Internet Center.

Along with being published online, the article was also included in the October 2022 edition of the monthly magazine.