In iOS 15, Apple has made some welcome improvements to the Photos app, such as the ability to see the EXIF data for a photo. The latter feature is accessed via a new “Info” button, which also brings up a caption field for the selected photo, the location where the photo was taken, and any Look Up information available. 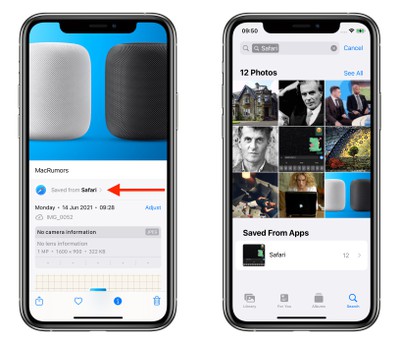 This metadata information also acts like an organizing tag, so if you tap the “Saved from” location in bold, the ‌Photos‌ app will filter your photo library to show you any other images that were saved from the same app, meaning you don’t have to scroll endlessly for any others that might be in your camera roll.

The new feature adds another organizational layer to your photos, allowing you to, say, find all the images you’ve saved from Messages or WhatsApp conversation threads without having to go into the apps themselves.

‌iOS 15‌ is available as an early developer beta, with a public beta due to be released next month and an official release set to drop this fall.

Fri Jun 18 , 2021
A wave of brief internet outages hit the websites and apps of dozens of financial institutions, airlines and other companies across the globe Thursday. Internet monitoring websites including ThousandEyes, Downdetector.com and Fing.comshowed dozens of disruptions, including to U.S.-based airlines.   Southwest Airlines reported a “brief outage” affecting its website and “internet-based […]