From the start, OnePlus has positioned its midrange lineup of Nord phones as a less expensive, entirely separate lineup to its flagship devices. But with the Nord 2, which comes as a direct successor to the original Nord released last year, the line between the two seems blurrier than ever.

While the original Nord had its own character, such as a unique design and exclusive features like an ultrawide selfie camera, the Nord 2 feels more like a stripped down flagship. It’s got a very similar camera bump to the OnePlus 9, for example, and although the specific sensors are different, its cameras fill the same functions. But all the core essentials are still there: a vibrant high refresh rate screen, good battery life, and easy-to-use software. 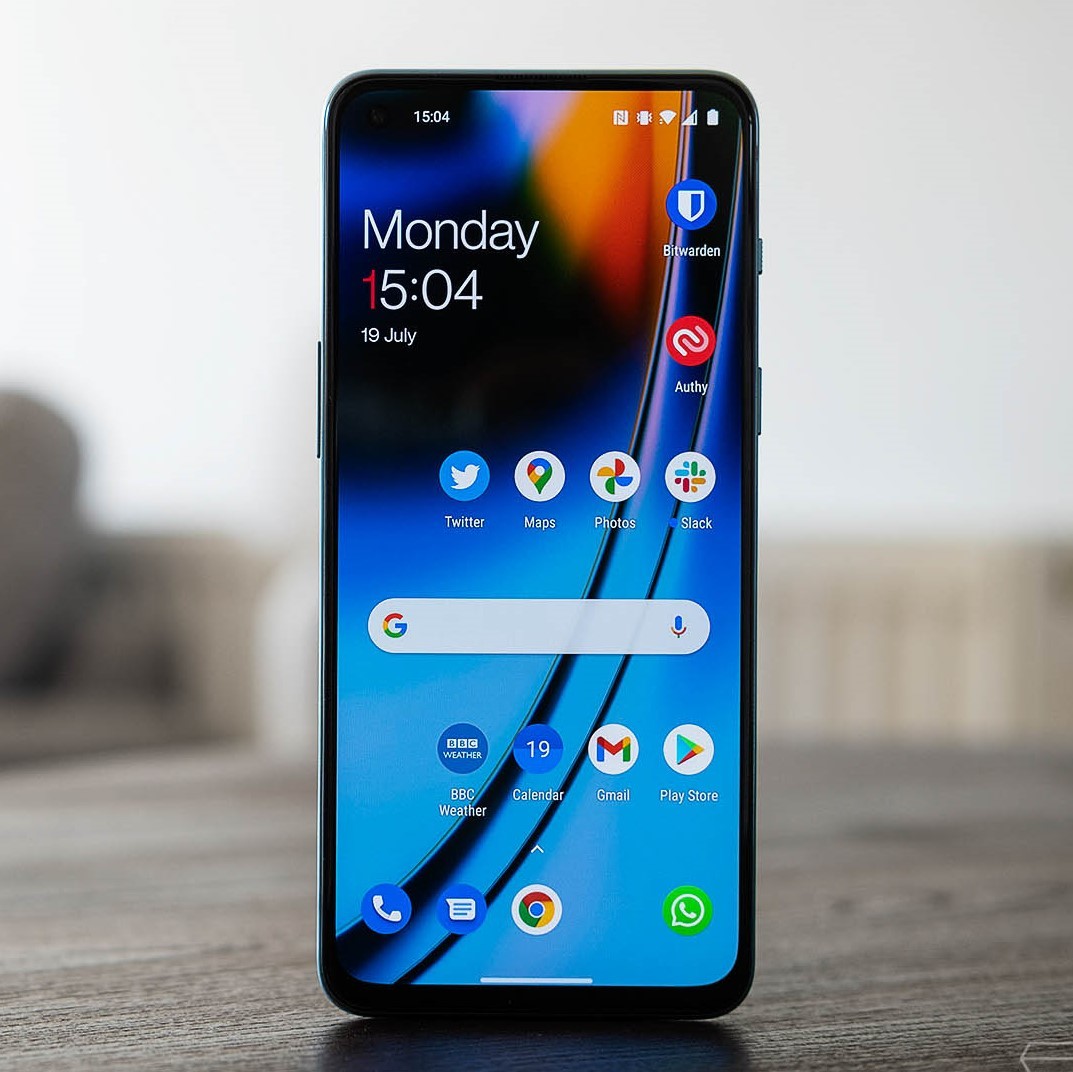 With its 6.43-inch display, the OnePlus Nord 2 is a hair smaller than the OnePlus 9 (which has a 6.55-inch display), but otherwise this is a very similar-looking device. There’s a rectangular camera bump on the back containing three cameras, a hole-punch cutout for the selfie camera on the top left on the front, and a USB-C port on the bottom (but sadly, no headphone jack). Biometrics are handled via a snappy in-display fingerprint sensor, and there’s a physical slider to switch between silent and vibrate on the right of the phone.

You’ll find Gorilla Glass on the front and back of the phone, but since its frame is plastic you might want to use a case if you’re particularly worried about the frame’s finish wearing off. Otherwise I didn’t notice the phone flexing any more than a typical aluminum framed phone. Like the original Nord, the Nord 2 doesn’t have an official IP rating for dust or water resistance.

Oh, and this is also a 5G phone: you get sub-6GHz support, but no mmWave. Given the latter high-speed, low-range network type has barely started to roll out in the Nord 2’s release markets, it’s not something many people are likely to miss.

The most notable sign that this isn’t a flagship OnePlus device is its processor, which is a MediaTek Dimensity 1200-AI rather than one of Qualcomm’s flagship Snapdragon 888 chips. Considering MediaTek is a brand more commonly associated with budget devices, I was apprehensive about its inclusion on the OnePlus Nord 2, but I came away pleasantly surprised by performance overall. Yes, you miss out on Qualcomm-exclusive features like high quality AptX Bluetooth audio, but otherwise switching between apps was hitch-free, and the processors’ GPU happily made the most of the phone’s smooth 90Hz display while scrolling through even a relatively graphically intensive Twitter feed (which, in comparison, stuttered on the original Nord). I noticed the phone being slightly slow to wake up on a couple of occasions, however, but overall performance was on a par with, if not slightly better than the original Nord in everyday usage.

The Nord 2’s 1080p screen is generally hard to fault. It does everything well that you’d expect from an OLED display. Whites are crisp and bright, colors are punchy, and blacks are, well, black. Its 90Hz refresh rate is technically a step down from the 120Hz panel that you’ll find on phones like the OnePlus 9, but in practice I didn’t notice a downgrade.

As a bonus, this time around the Nord 2’s screen is actually flanked by stereo speakers (one downward-firing and one from the phone’s earpiece), as opposed to the original Nord, which only ever played media audio out of its downward-facing speaker. You’ll still want to use headphones for proper listening, but the speakers’ volume meant I had no trouble hearing podcasts played out of the phone’s speakers while cooking.

I got a little under five hours of screen-on time out of the Nord 2’s 4,500mAh battery, easily enough to last through a full day with a little to spare. But I was more impressed by the inclusion of Warp Charge 65 fast-charging here. When charging from zero, I hit 89 percent after a half hour, and 99 percent after 35 minutes, which felt remarkably quick. You have to use one of OnePlus’ proprietary chargers and the cable it comes with to get these speeds, but at least you get both in the box. The Nord 2 doesn’t support wireless charging, which isn’t entirely surprising at this price.

The Nord 2 runs on OxygenOS 11.3 out of the box, which is notable for being the first version of OnePlus’ software to reflect its integration with Oppo’s ColorOS, as XDA Developers reported. But despite the under-the-hood changes, the phone didn’t feel radically different in everyday usage. I found a few changes in the Settings menu, though, where several controls have been renamed and shifted positions slightly. It meant I struggled initially to find OnePlus’ standard screen calibration options, for example, but they’re still there in a slightly different sub-menu. It bodes well for the future of OxygenOS, which continues to be an uncluttered take on Android that I mostly appreciate for its ability to keep out of my way. In terms of ongoing support, the company promises you get two major Android updates and three years of security updates with the Nord 2, though it declined to say how regular these security updates would be.

Around the back of the Nord 2, you’ll find three rear cameras. Its main camera uses a 50-megapixel Sony IMX766 sensor (which OnePlus previously used for the ultrawide cameras on the 9 and the 9 Pro), which is flanked by a much lower-resolution pair of cameras: an 8-megapixel ultrawide and a 2-megapixel monochrome sensor of questionable utility. On its front there’s a 32-megapixel selfie camera, but it’s not paired with an ultrawide camera this time around, which makes me, personally, a little sad.

I generally liked the shots I got out of the Nord 2, and OIS on the main sensor means it’s easy to get consistently sharp shots every time you hit the shutter button. That said, they definitely have OnePlus’ typically punchy look, which prioritizes vibrancy over accuracy. It’s most obvious when you look at landscape photograph shots: I can promise you the grass in the photographs below was much less green and much more yellow in reality. Edges also tend to have a slightly over-sharpened look to them.

At night, the Nord 2’s standard photography mode automatically takes photos that are almost as bright as the Google Pixel’s Night Sight mode, and if you head into the phone’s dedicated Nightscape Ultra mode you get photos that almost look like they were taken in daylight were it not for how washed out they appear. In its standard photography mode, this brightness hides the fact that low-light shots aren’t particularly detailed, like in the photo below of an apartment block where the dividing lines between wooden slats have been smoothed out of existence. You’ll be able to make out your friends if you photograph them in a dimly lit bar, but their skin might come out looking a little smooth and plasticine-y in the process.

Oddly, this vibrancy doesn’t carry over to the ultrawide camera, where shots seem much more muted and arguably more color-accurate in comparison. There’s also less detail thanks to the lower resolution sensor.

When it comes to people, the OnePlus Nord 2 can’t seem to resist the temptation to brighten skin tones, raise shadows, and make everything look a little flat. Even with its beautification mode turned off, I still got the impression the Nord 2 was avoiding showing me every last wrinkle and pore in my face. To its credit, the effect means you can barely tell I took the shots below while sweating my way through a horrid UK heatwave, but I think the overall photographs end up looking blander as a result. It’s a similar story with the phone’s selfie camera, although this is partially offset by the extra detail from defaulting to 32-megapixel shots, while the main camera on the rear defaults to around 12.

OnePlus’ continued insistence on including low-resolution monochrome sensors on the backs of its phones is baffling. The black and white photography option that makes use of it is still buried all the way at the end of the camera’s list of filters, and even once you go to the trouble of using it, I’ve yet to notice any difference it makes compared to a software-based filter. You can even cover up the monochrome sensor on the Nord 2 while you take a black and white shot, and the phone seemingly continues on unperturbed.

But complaints about the easily ignorable monochrome sensor aside, I think the Nord 2’s cameras get a lot of things right if you share its preference for bright, colorful shots. OIS on the main camera means it’s relatively easy to get crisp photographs, and you could do a lot worse at this price point.

A month ago, OnePlus announced the so-called Nord CE or “Core Edition,” an affordable phone which was pitched as offering the essential features of a OnePlus smartphone without any extra bloat. But the more I use the OnePlus Nord 2, the more I think that this is the phone that fits that description much more accurately.

From its screen, to its cameras, its processor, and its software, the Nord 2 feels like a flagship phone stripped of any unnecessary features. There’s no Hasselblad-branded cameras, just a reasonably specced set of sensors. There’s no flagship Qualcomm chipset, but instead you get a processor that has no trouble handling the day-to-day duties of a modern smartphone. No wireless charging, but fast wired charging that more than makes up for it.

All of this adds up to a compelling device if you’re looking to spend between £400 and £500 and you’re in a market when OnePlus is actually selling the Nord 2. A stripped down flagship it may be, but it’s hard to argue with what’s been left.

Photography by Jon Porter / The Verge