A video of a puppy imitating a bunny in a cute video has gone viral on social media. It has over 3 million views. 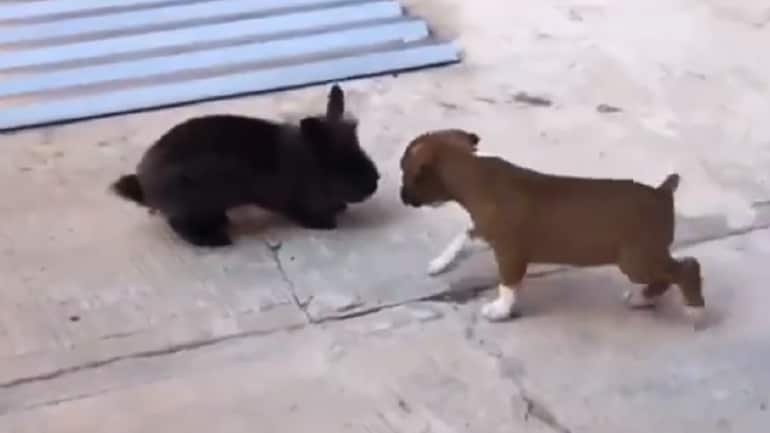 Screenshot from the viral video.

A video of a puppy imitating a bunny in an adorable viral video has gone crazy viral on social media. The cute video has over 3 million views. It was shared by a Twitter account named Buitengebieden. Netizens are going gaga over this viral video featuring the puppy and a bunny.

In the 8-second video, a bunny can be seen hopping in front of a puppy. After seeing the bunny hop, the little dog starts imitating it. “Puppy thinks he’s a bunny..(sic),” the caption read.

Netizens are delighted to see this adorable video of the puppy. “Imitation is the most sincere form of flattery. Wonder if the bunny appreciates it (sic),” read a comment. “Haha.. that is adorable (sic),” another comment read. Some Twitter users also shared fun animal videos in the comments section.

Check out more comments below:

Imitation is the most sincere form of flattery. Wonder if the bunny appreciates it.

Haha.. that is adorable

Hey, my kid thinks our puppy is a bunny.
She named him Fo0f.
Foof is the term for a baby Delmarian bunny. I don’t think she “named him” she just thinks he is a Foof. It’s more of a statement. She basically named him “bunny” and thinks he’s her bunny.

I think it’s the puppy’s way of bonding with the bunny.

What do you think about this video? Tell us in the comments section below.

ALSO READ| Little girl gets a puppy as surprise birthday gift. Her reaction is now a viral video

What Happens on the Internet Every Minute (2022 Version) [Infographic]